Green is the colour, but  football  isn’t  the  game,  juicing  greenage  is.  I,   Guinea-pig,  Chlorophyllium!

I Love breakfast Juice and here is the recipe which I am still not tired of after 8 years – (natch, grass day in day out is the normal culinary fate of us Gps)

I am though finally veering towards a larger componant of greens and adding more cabbage and chard. Cabbage is suprisingly rather nice. Sometimes I add chlorella, or drink it with a ginseng tablet. I have currently treated myself to a bag of detoxgreens made by the Inspiral Cafe in Camden but available in healthfood shops for £6.99 and add a teaspoon after juicing.

2 tomatoes, one clove of garlic, one stick of celery, 1 carrot and some cucumber.

Celery juice is reputed to be wonderful for arthritis (and so is Turnip).

But what is all the fuss about juicing? Why should we juice, and can it really help cure cancer or is that a pie in the sky urban myth/wishful thinking?

Over the years there have been many promising avenues outside of mainstream medicinal treatments for cancer and much excitement has come and gone over preliminary studies within the establishment that demonstated the potential for success within the fields of nutrition, herbs and psychotherapy. As Earl Baldwin of Bewdley wrote recently in the Times –

Aggressive dietary approach for malignant melanoma in particular suggested the possibility of a very large survival advantage over conventional cancer treatment but there were no funds within a small therapy organisation to follow up the original retrospective study.

(Earl Baldwin Of Bewdley, former Chair, Parliamentary Group for Integrated Healthcare)  The Times Newspaper. Tuesday September 11th 2012.. (thanks mum for sending me that one.)

Even if the monocultural mindset of allopathic medicine  – drugs as the cure all  – plus corporate interests always succeed in ignoring promising alternatives that doesn’t mean that we have to.

As a young child I can remember being admonished to eat my greens… in my case peas…which I loathed (and still do, I mean come on, how many guinea-pigs have you seen happily munching peas?) and it is accepted cross cultural wisdom that vegetables are good, good quality vegetables even better, for so many reasons. But for people who are neither veggies, or herbivores such as myself, nor wanting to use juicing as a cancer protocol, there are a couple of persuasive arguments for juicing vegetables… Chlorophyll being one of the main ones.

Chlorophyll is present in green vegetables, but why is it good, and why do many indigenous peoples and all mammals except homo sapiens live primarily on grasses and green plants in times of disease ?*(pp227)

Chlorophyll is found in all greenage as a by product of photosynthesis, and all plants touched by sunlight contain chlorophyll. Despite my dim recollections of O level biology (special guinea-pig school) I had forgotten the amazing fact that chlorophyll foods act as a form of stored sunshine. Talk about natural goodness. Consider the fact that chlorophyll performs like vitamin D in the body, which is a potent anti cancer vitamin. Juicing greens ensures the body gets the maximum amount available which of course is really useful for people who live and work in the city, people who work in offices, and people who don’t get much natural sunlight due to night living or ill health.

And then there is all the phospherous and vitamins A and C which are important co-factors for the absorption of calcium, and the fact that at the centre of the chlorophyll molecule is magnesium,  (magnesium ions are essential to the basic nucleic acid chemistry of life http://en.wikipedia.org/wiki/Magnesium) plus fruit and vegetables are also the richest source of potassium which as we will see later is vital for restoring cell health AND vegetables also contain beta carotene and other carotenoids which have been shown to play key roles in retarding cancer* pp412. Phew. Being a herbivore is clearly good common sense!

Another advantage of juicing more relevant for people using it as a cancer protocol was researched and written about by Max Gerson, one of the major exponants of juicing and coffee enemas. He found that whilst most vitamin and mineral supplements are irritating to a severly ill person, nutrients and enzymes found in juice can be safely absorbed.  Gerson’s theory was the idea that chronic disease starts with a loss of potassium from cells and a resultant invasion of sodium plus water causes loss of electrical potential, improper enzyme function and reduced cell oxidisation..thus the potassium available to the body through juicing helps rectify this.*

Enough of the human biology/chemistry lesson.

Hand operated juicer – One of the cons of this paean to self sufficient ludditeness is that it is arduous and not so efficient, but it will build up your muscles and help general buffness, be portable (I took my to Paris when visiting friends and you can also take it to festivals if you get obsessive – it can happen) and also juice wheatgrass… plus they cost 28 squids or something.

Centrifugal juicers.. are okay and better than nothing, but slightly more faffy to clean, and the quickly rotating parts build up a static charge which degrades the juice quicker.

Champion juicers – I cant praise enough. Expensive, relatively,yes, but I’ve had mine years and they generally come with a lifetime warranty.

Juices specifically for cancer:  –  I am only including vegetables here this time – fruit juices are considered too high in sugar for people with cancer.

The jury is sometimes out for carrots… some people maintain it is too sweet, others that it is a hybrid vegetable and as such is merely a good transition juicing agent before adopting a green juice habit yet one of the first recorded cures was with carrot juice  – a Mary C Hogel of Salt Lake Utah who was terminally ill with cancer..(Christopher,J.R.School of Natural Healing Provo,UT:BiWorld Pub.,1978, pp266-267). They are low in fat and protein and abundant in minerals, vitamins and other nutrients. Quality carrots are very rich in beta carotene. Make good foundation juice. Have an essential oil which kills intestinal parasites and unhealthy bacteria. The enzymes of juices generally are oxidising. Can be stored for up to 3 hours of in airtight container and in the refrigerator.

Often considered too wet and cold for juicing for people with cancer by chinese medicine. Chinese classics describe cancer as a damp water stagnating  disease, but cucumber could be beneficial for people on radiotherapy, and for people not with cancer – cucumber has a great alkalising affect.

Has a very cleansing affect on the liver and blood and also lubricates the intestines and are thus good for constipation plus give the delight of red poo. Used in conjuction with a live enzyme supplement called Zell Oxygen there have been great results with  cancer patients in Germany.(Dr. Wolz and Otto Warburg)

Garlic.. raw, half a clove twice a day suggested amount. Has been suggested that it can be affective against leukemia. Contains germanium,and allicin. Recommended not to use too much as can damage the liver and stomach cos of its heat and pungency, and have a negative affect on the mind.*pp148

GINGER – excellent in the mornings. It’s good to add heat to cold wet food. My local Chinese doctor says not to juice ginger in the evenings.

Parsley – a powerful blood cleanser, one of the most potent vegetable juices. Apparently dissolves sticky deposits in veins and helps maintain elasticity of blood vessels. Always mix it with other juices such as carrot juice, as it is too strong to take on it’s own. **

Cabbage, turnip, kale, cauliflower, brussel sprouts and broccoli, have been recommended in general by the National Cancer Institute. They contain dithiolthiones.. anti cancer anti-oxidant properties, Indoles.. which protect against breast and colon cancer, and sulphur which has antibiotic and anti viral properties. Cabbage and its juice renoun for clearing mental depression. Cabbage also good to help digestion.

It is worth noting that people planning to use juice as a health protocol  through fasting are advised to also use enemas to maximise the health affect. I would particularly recommend following Queen Afuas health protocols for full body health. 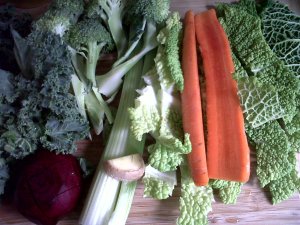 ← So Glad I’m Not Scared of Spiders.
Thrills and Spills. Anyone for Coffee? →