The Psychology Of Persistence. How to Survive and Thrive

Posted by calliope12 on July 23, 2018 in Advice on Having a Cancer Diagnosis, ancestral wisdom, cancer busting tactics, Fear, Health, How to survive and thrive, Living with Grace, Time, Truth, Whose Truth

How to have persistence in the face of adversity is a question I am often asked about. How do you maintain your unwavering belief when things you do don’t seem to work or you fail at them? This question whilst relevant in all areas of life seems particular fraught around the subject of cancer, or living with chronic ill health when each set back can have the shimmering weight of a loaded dice on the path of life or death.

to continue on is not to let your past history or your failures define who you are. To constantly feed the belief of your own dreams and greatness. As Gareth Southgate, the football manager of the young British team who just had a great World Cup experience if not winning, says “We always have to believe in what is possible in life and not be hindered by history or expectations.”

If our body is a living history, our own living history, then the idea of not been hindered by history takes on a complicated turn for those of us living with dis ease as we are confronted with the story of our embodied history every day. Similarly and as a parallel reflection we also, all of us, have an embodied collective history and every country can be seen to have it’s own culturally constructed body. I mean if countries are the body of the social collective then millions of us are also living with legacies in our collective bodies of  mysogyny, colonialism, institutional racism and homophobia everyday as well. Some of us maybe living in or fleeing war zones similarly being confronted with the living history of human conflict, violence, power struggles.

I think the same principle applies for creating health and well be -ing in the physical body as for the collective societal body … to build futures based on hope and not fear, (to quote Nelson Mandela). Futures based on and born from positive vibrations, that create the changes we want whilst naming but not fighting the ones we don’t. Positive vibrations that can be sown and nurtured when we are not crushed in mental defeat and the weight of history, or exhausted by anger and fightback against systems that don’t serve the majority of us, that suck our precious life energy fighting them.

For those of us lucky enough to have all our basic needs met and live in relatively peaceful societies maybe the elusive freedom that many humans quest for is in fact the freedom from ourselves and the weight of our embodied personal and national narratives?

Certainly in the article (whose link I include below) about Gareth Southgate and the psychological coaching they had from Pippa Grange  the British team  was “ playing with freedom; there’s no fear of failure. Fear is essentially made up because it is a projection into the future, where you have created a narrative of something badly going wrong. We all do it, and we get very good at creating the negative [future] rather than the positive one.”

Now for sure some people would see or say that I spend a lot of guineapig brain power contradicting my little furry body’s truth but I prefer to see it as feeding my being with a truth that I feel is more resonant, a truth which creates my future with joy and positivity but also pragmatism and empowerment… that this is a temporary aberration and my body made this so it can heal this. Imagine that as a mantra for the ills of the world, not so dissimilar to the thinking that this too shall pass!

Yes I have had set backs, and dramatic interludes, some of them in this blog https://cancerguineapig.com/2016/08/02/european-exchanges-and-other-stories-pt-1/ and things that worked and things that didn’t, but with each set back there has been a lesson learnt and wisdom gained. To nod to Gareth again with each failure I have learnt to not be afraid of what goes wrong, as whatever has gone wrong I have dealt with it, have lived through it, and become stronger and more resilient. As Pippa Grange the team psychologist for the Uk mens footie squad says again:

The imagination is a tremendous untapped resource when harnessed mindfully for the good of all beings. Most of us are familiar with the idea of positive thinking. Yet positive thinking itself is not always so productive. For me the trick is to use the imagination to visualise what is needed to do to get the result, instead of simply creating a fantasy result. So whilst I believe my body made this so it can heal it .. this cancer is a temporary aberration I also constantly give as much support as I can to my body so it can do its business!

The idea of using the imagination in this way has long been used by sports teams for example whose trainings often comprise of say 60% mental work and 40% physical work, but there has been much other research conducted on using the imagination to stimulate hormones and chemicals in the body, (all of which escapes me as I am writing this but will try and find some sources for later).

Whilst the World Cup is still relatively fresh, and keeping on the psychology of footie theme … in a recent article about the youngest member of the winning French team – the amazing 19 year Kylian Mbappe  –  who gave his winnings to support disabled children in his hood btw  – Vadim Vasilyev the man who played a key role in signing him for is first professional club, says this:

“I spoke to him, we spent some time together after we won the French title, he always had it in him. He knew this would happen, he didn’t know how and when but he believed in himself and he knew his destiny is to become a big, big, big player and he’s very sure of himself.”
“It’s like he knew, he always worked so hard and now it’s happening and, of course, it happened fast but he had it inside. But this is your destiny and he was ready. He was, of course, surprised that it happened so quickly but in the end he was ready because that’s what he was always thinking, dreaming, working for. He knew he would do it, one day he would do it.” 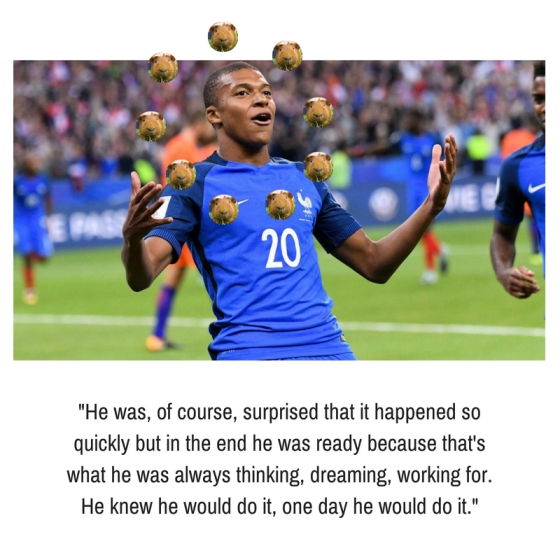 So my friends, never give up, never be defined by past failures and defeats, know that you can keep working for your goals and that defeat simply builds resilience. The future can still hold magic, promise and success.

Tags: creating your own future, Gareth Southgate, hope not fear, How to have persistence in the face of adversity, Kylian Mbappe, sports psychology, World Cup 2018 Permalink

← Cleavers Time Again
Connection As The Key To A Healthy Life →